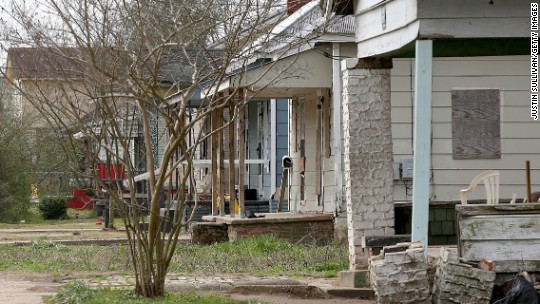 Nearly 14 million Americans live in extremely poor neighborhoods, more than twice as many as in 2000. The economic downturn in the early 2000s, which was followed by slow job growth and then the Great Recession, sent the poverty rate soaring. The growing concentration of poverty is closely linked to the availability of affordable housing, the report from Brookings Institution's Metropolitan Policy Program found. In 2000, there were just over 2,000 Census tracts with concentrated rates of poverty -- where 40% or more of residents are poor. in the period between 2010 and 2014, that number had grown to nearly 4,200. Brookings compared data from the 2000 decennial Census and from the American Community Survey that looked at 2010 through 2014. Poverty often becomes concentrated in neighborhoods with blocks of public or subsidized housing. Also, it can happen when middle income families move away, leaving the poor behind, said study co-author Elizabeth Kneebone, a
read more »

Low-Income Americans Can No Longer Afford Rent, Food, and Transportation

Updated by   Soo Oh   on March 30, 2016, 11:00 a.m. ET   soo@vox.com Low-income Americans are experiencing a staggering price hike in housing costs — a change that makes it sometimes impossible to afford basic necessities. A  new Pew Charitable Trusts analysis of data  from the Bureau of Labor Statistics shows that in 2013, low-income Americans spent a median of $6,897 on housing. In 2014, that rose to $9,178 — the biggest jump in housing spending for the 19-year period of data that Pew studied. The cost of other necessities, like transportation and food, also rose, albeit not as dramatically. 2014 was the first year that Pew studied in which median spending on these three categories was higher than the median income for those in the lower third of income groups. Lower income groups earn less income, while the costs of basic living are rising. Rent is making up nearly half of their expenditures.  Download the data here. "We show in these figures that over time,
read more »

By  Karin Brulliard   March 31 at 3:15 PM (Linda Davidson/The Washington Post) Pit bulls are pretty much Public Enemy No. 1 of American dogs. They’ve got a reputation for being dangerous, though whether that’s due to nature or nurture is  the subject of much debate . In any case, pit owners who want to live in San Francisco have to sterilize their dogs. If they fancy moving with their dogs to  Miami  or  Denver , well, they’d best forget it: Laws ban pit bulls from setting foot — er, paw — in either city. That scorn persists even though many dogs labeled pit bulls — which isn’t a breed, but a category that includes American pit bull terriers and Staffordshire terriers — aren’t genetically pit bull-types at all. In fact, according to a  new study , in animal shelters it persists in part  because  of that labeling. Shelters typically identify dogs’ breeds based on information from owners or appearance. Some research indicates dogs labeled American pit bull terriers are the most
read more »
More posts