Showing posts from September 7, 2017
Show all

New National Report Focuses on Behavioral Health, Including Opioid Misuse Today, SAMHSA released the latest findings from the 2016 National Survey on Drug Use and Health (NSDUH), which provides the estimates on substance use and mental health in the United States, including the misuse of opioids. In 2016, there were 11.8 million people ages 12 or older who misused opioids in the past year. The majority of those individuals misused pain relievers rather than used heroin; 11.5 million people misused pain relievers and 948,000 were heroin users. Additionally, the prevalence of serious mental illness, depression, and suicidal thoughts has increased among young adults over recent years. The report also includes data about opioid use disorder, substance use treatment, marijuana use, and mental illness. The complete findings of the report are available online. SAMHSA will be releasing additional 2016 NSDUH reports on adul
read more » 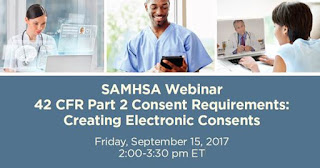 Is your organization looking for a way to electronically manage patient consent that complies with 42 CFR Part 2? Join the Substance Abuse and Mental Health Services Administration (SAMHSA) for a webinar on “42 CFR Part 2 Consent Requirements: Creating Electronic Consents” on Friday, September 15, 2017 from 2:00-3:30 pm ET . This webinar will provide the following: <![if !supportLists]> •        <![endif]>A brief background and consent requirements related to 42 CFR Part 2 <![if !supportLists]> •        <![endif]>Examples in which SAMHSA’s online consent management application called Consent2Share meets the consent requirements electronically Register today at: https://attendee.gotowebinar.com/register/2372769567689794051   Please send questions regarding webinar registration to: HealthITWebinars@abtassoc.com . This message may contain privileged and confidential information intended solely for the addressee. Please do no
read more »

spotlight on... WEBINAR: Thursday, September 7, 1:00 pm Which Rules are the Right Rules for Low-Barrier Emergency Shelters? How can shelters that serve families and survivors of domestic violence maintain a low-barrier environment that prioritizes safety for participants and staff? This webinar will address how to re-tool your shelter's rules, expectations, policies, and procedures. We'll be joined by two shelter
read more »
More posts