Denying Housing Over Criminal Record May Be Discrimination 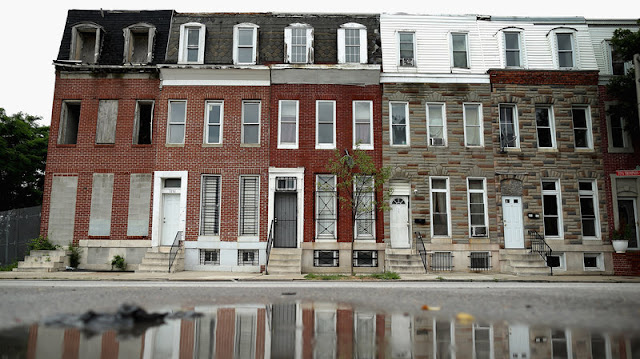 Rowhouses in Baltimore sit across the street from a church where Sen. Barbara Mikulski (D-Md.) held a meeting last summer about, among other things, reducing ex-convict recidivism.    Chip Somodevilla/Getty Images The Department of Housing and Urban Development is making it easier for people with criminal records to find housing. In new guidance, released Monday, HUD tells landlords and home sellers that turning down tenants or buyers based on their criminal records may violate the Fair Housing Act. Because of widespread racial and ethnic disparities in the U.S. criminal justice system, criminal history-based restrictions on access to housing are likely disproportionately to burden African Americans and Hispanics. New HUD guidance on criminal records and the Fair Housing Act People with criminal records aren't a protected class under the Fair Housing Act, and the guidance from HUD's general counsel says that in some cases, turning down an individua
read more »

Water from a fountain? Not in Baltimore city schools

Signs over bathroom sinks telling students not to drink the water at Cecil Elementary School. Cecil Elementary School has been using bottled water to drink for years. Long before Flint Michigan's tainted water became a national issue, Baltimore city schools found the same problem in some of its buildings and shut off the water. For nearly the past decade, kids have been drinking bottled water.   (Lloyd Fox / Baltimore Sun) At Cecil Elementary School in Baltimore, where bone-dry water fountains stand next to brimming water coolers, several third-graders who've never drunk from the fountains puzzled over why they didn't work. Maybe the fountains need batteries and they don't have them, one student said. Maybe the pipes are clogged, another suggested. "We have always wondered about that water fountain," said Alexandria Francis, who along with her classmates had no clue that administrators have shut down fountains throughout the Baltimore City
read more »